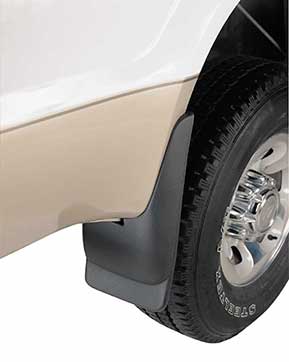 Thwart the regular assault of mud, slush and rocks against your paint. Husky Liners Mud Guards provide a substantial barrier against these road hazards, keeping your colors true and clean. Plus, they come in a paint-ready matte finish for matching to your exterior. Installing Husky Mud Guards for trucks takes less than an hour. The custom-made design allows Husky Mud Guards to anchor inside your specific wheel well with only minor drilling required. Husky includes all the hardware you'll need for sure mounting that won't come loose. Get sturdy molded plastic protection for your vehicle's paint in the front and back.

Husky Liners guarantees to the original purchaser of Husky Liners products that they will not break or tear under normal usage during the life of the motor vehicle in/on which they are installed. This warranty shall only be effective while the original purchaser owns the motor vehicle and shall not apply to Husky Liners products that have been removed from the original vehicle on which they were installed. This warranty applies only to those parts that are correctly installed in/on the vehicle for which they were intended. Husky Liners will warrant any part during the warranty period that proves defective in material and/or workmanship under normal installation, use, service, or maintenance.